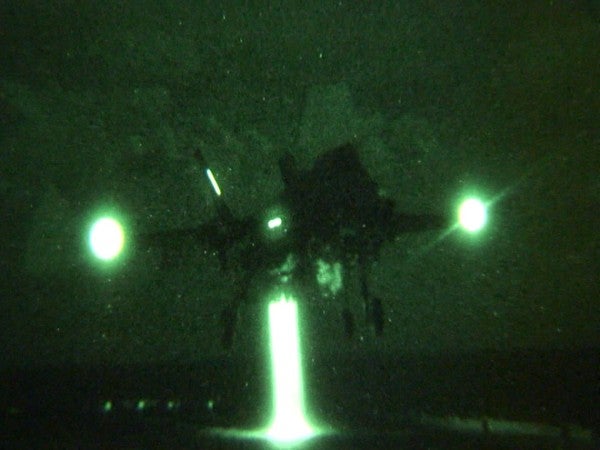 The short takeoff and vertical landing variant (STOVL) variant of the JSF has conducted night landing at sea as part of the second of three planned tests, designed to expand the shipboard operating envelope of the USMC F-35B aircraft.

The USMC will conduct a series of trials of two F-35B aircraft to determine their suitability for sea-based operations during the 18-day long ship trials.

In addition to expanding the aircraft's allowable wind envelope for launch and recovery, the F-35B pilots will perform their first ever night operations at sea, initial mission systems evaluations at sea and evaluate the dynamic interface associated with aircraft operations on a moving flight deck.

"There were eight successful landings in one night"

The Lockheed Martin-built aircraft will be further evaluated for shipboard sustainment, as part of the testing.

The first shipboard testing phase for the USMC's F-35B aircraft variant was successfully completed in October 2011.

Prior to sea trials, the two F-35B aircraft have undergone electromagnetic environmental effects testing while the Litton Ingalls shipbuilding-built USS Wasp has underwent a series of shipyard modifications to accommodate the F-35B.