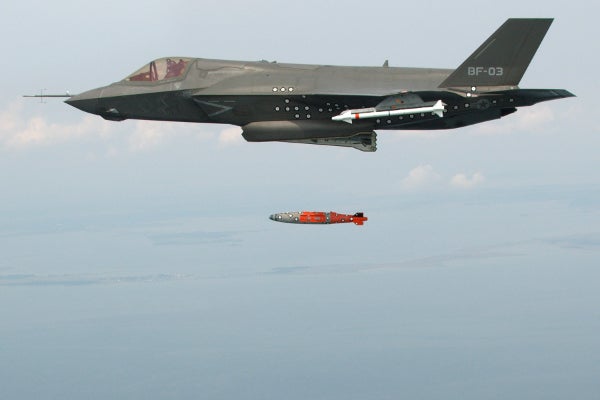 The US Marine Corps’ (USMC) F-35B Lightning II variant of the Joint Strike Fighter (JSF) has successfully completed its first airborne weapons separation test as part of ongoing evaluation tests at NAS Patuxent River, Maryland, and Edwards Air Force Base in California prior to its delivery to the fleet.

During the flight test at the Atlantic test range, the short take-off and vertical landing F-35 variant test aircraft BF-3 released an inert 1,000lb GBU-32 joint direct attack munition (JDAM) separation weapon from an internal weapons bay, while travelling at a speed of 400knots at an altitude of 4,200ft.

Lockheed Martin test pilot for the mission Dan Levin said that using an internal weapons bay is an indicator to how much capability the JSF is going to bring to the troops.

"Stealth, fifth-generation avionics and precision weapons, coupled with the flexible mission capability of the short take-off and vertical landing F-35B, is going to be huge for our warfighters," Levin added.

“This weapons separation test does represent a significant entry into a new phase of testing for the F-35 programme.”

The airborne weapon separation test validates the F-35’s capability to properly release the weapon from its carriage system away from its path, while allowing pilots to engage precision weapons to strike enemies on the ground and in the air.

US Navy director of test for F-35 naval variants captain Erik Etz said: "While this weapons separation test is just one event in a series of hundreds of flights and thousands of test points that we are executing this year, it does represent a significant entry into a new phase of testing for the F-35 programme."

The F-35 JSF is capable of takeoffs from smaller amphibious warfare vessels, as well as landings on improvised airstrips.

Designed and developed in collaboration with industry partners Northrop Grumman and BAE Systems, the aircraft is also scheduled to enter service with the UK and Italian navies.