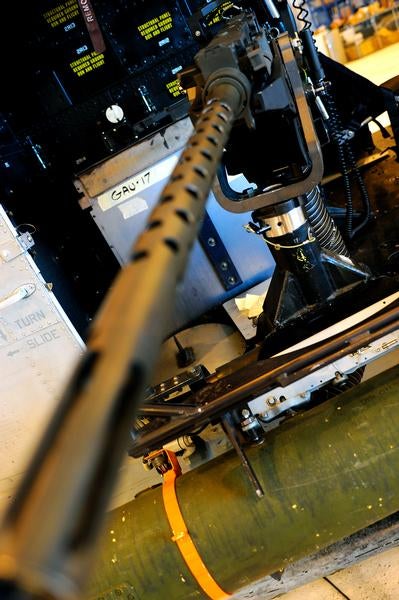 Developed to meet a US Marine Corps (USMC) urgent universal needs statement, the redesigned weapons mount, which was originally designed for the GAU-17 mini gun, will now provide enhanced ground-firing capabilities for the GAU-17, GAU-21 and M240 weapons.

In addition, the enhanced weapon mount can fire weapons with greater range, elevation and azimuth, while the aircraft is on the ground.

PMA-242 programme manager captain Brian Corey said that the upgraded mount can be used by US Marines in Afghanistan to defend against enemy fire in the air and on the ground.

"The redesigned mount allows them to continue Operation Enduring Freedom with weapons that can protect them in a wider range of situations with an increased field of fire," Corey added.

"The team of engineers used in-flight data, physical fit checks and computer-design software to ensure that all clearance requirements were met."

PMA-242 aircraft gun systems deputy programme manager marine captain Scott Roland said that the modernised system would ensure that no part of the aircraft can be shot inadvertently while increasing each weapon’s field of fire as much as possible.

"The team of engineers used in-flight data, physical fit checks and computer-design software to ensure that all clearance requirements were met," Roland said.

Capable of conducting shipboard missions including takeoff, landing, refuelling and rearming, the UH-1Y utility helicopter can also support missions, including command and control, aeromedical evacuation, troop and supplies transport, as well as search-and-rescue.