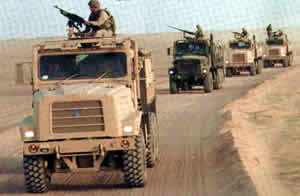 Oshkosh Defense Joint and Marine Corps Programs vice president and general manager John Bryant said: "The MTVR was designed to give Marines improved off-road mobility, and since being fielded, it has set the standard for all-terrain vehicle performance.

"The MTVRs delivered under this order will support Marines and Seabees with a wide array of tactical missions and on the most challenging terrain."

"The MTVRs delivered under this order will support Marines and Seabees with a wide array of tactical missions and on the most challenging terrain."

The US Marine Corps System Command will serve as the contracting activity partner and work will be carried out at company’s facility in Wisconsin, US, while deliveries are expected to be complete in September 2014.

Available in several variants, the MTVR features an off-road 7.1t payload capacity and can be used to transport troops, materials and equipment.

The Oshkosh MTVR all-terrain, multipurpose tactical vehicle is equipped with an Oshkosh-patented TAK-4 independent suspension system as well as 16in of independent wheel travel for extensive cross-country operations.

To date, more than 11,000 MTVR vehicles have been delivered to the Marines and Seabees.