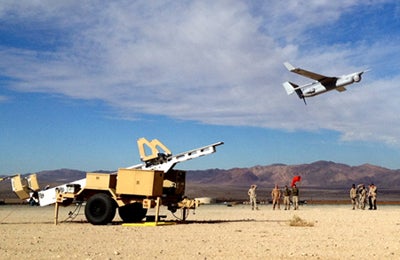 The STUAS programme, awarded to Insitu in July 2010, is intended to provide warfighters with maritime and land-based tactical intelligence, surveillance and reconnaissance data collection, and dissemination capabilities.

The first operational assessment of the UAS was completed in six months after the contract was awarded and the Marine Corps are acquiring the system through a Government-Owned, Contractor-Operated (GOCO) business arrangement.

The system will be stationed at Twentynine Palms and will be operated and maintained by Insitu Field Service Representatives (FSRs), who have accumulated over 575,000 combat flight hours with the ScanEagle UAS.

US Marine Corps, PMA-263 programme manager colonel James Rector said: "This EOC system at Twentynine Palms will optimise the predeployment training and exercises for the Marines prior to their arrival in OEF or any other AOR."

Meanwhile, the USMC will continue with development of the Integrator-variant, RQ-21A, in collaboration with Insitu.

The second Operational Assessment (OA-2) of the system is expected to take place by end of 2012, with scheduled delivery in 2013.

Image: Insitu has delivered the first of two Integrator unmanned aircraft systems (UAS) to the US Marine Corps. Photo: Insitu.