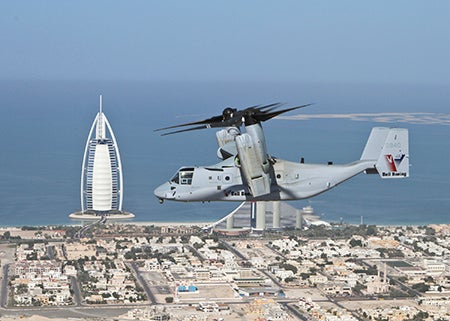 Bell-Boeing, a joint venture between Boeing and Bell Helicopter, has been awarded a $74m contract by the US Marine Corps (USMC) to provide Osprey ground-based trainers, also known as containerised flight training devices (CFTD).

Announced on 25 September 2012 by the US Department of Defense, the contract provides USMC with an option to add one additional unit.

Under the contract, Bell-Boeing will deliver seven trainers to support presidential transport activities for USMC to help reduce fuel usage and aircraft wear-and-tear, as well as maximise lifecycle cost savings.

Boeing training systems and government services vice president Mark McGraw said: "Our trainers prepare warfighters for any task that might be performed in the aircraft while keeping crews and aircraft safely on the ground."

The CFTD has been designed to train aircrews on basic aircraft familiarisation and handling qualities, including day and night flying with night-vision goggles, formation flying, aerial refuelling and landing on ships.

"Our trainers prepare warfighters for any task that might be performed in the aircraft while keeping crews and aircraft safely on the ground."

Capable of connecting locally to one another, as well as to other aircraft trainers, CFTDs provides enhanced robust simulations for crew training.

The first two trainers are expected to be delivered in May 2014 to Marine Helicopter Squadron One at Marine Corps Base Quantico, Virginia, US.

Deliveries of the remaining trainers will begin in January 2015 in Hawaii, California and New Jersey.