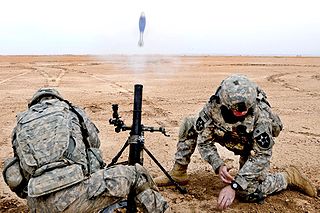 The US Marine Corps (USMC) has successfully tested a newly developed handheld mortar, known as a fire control unit (FCU), in an undisclosed area.

The live-fire test of the new mortar sight has been conducted by Marine Corps Base Quantico combat instructors and is sponsored by the Office of Naval Research (ONR).

Following the successful trials, the USMC has ordered six prototypes for units in Afghanistan.

The prototype sight, which attaches by hand near the muzzle of a 60mm mortar, has been designed to provide dramatic increase in target accuracy, most notably at night for users.

Developed upon a chief warrant officer's request to ONR's TechSolutions programme for a technology that improves the weapon's accuracy, the sight is small enough to fit in a uniform pocket and can be easily attached to the upper portion of the barrel.

The ONR-funded improvements also involve a new lightweight sling for easier transport that has an inbuilt heat shield to protect the user's hands.

"The sight is small enough to fit in a uniform pocket and can be easily attached to the upper portion of the barrel."

Over the longterm, the new sight and sling are expected to provide substantial financial savings, experts have said.

TechSolutions head Tom Gallagher said: "If our guys can tee up targets at a quicker pace, and hit their targets with less shots, that's a clear win not only on the battlefield, but in the cost category, which ultimately allows more training and opportunities for our warfighters."

TechSolutions had teamed up with L3 Insight, while working in conjunction with the US Marine Corps Forces, Pacific Experimentation Center, to develop the sight, and with Tactical Assault Gear for the development of sling / heat shield.

27 Oct 2020
Registration is disabled.
We use cookies to ensure that we give you the best experience on our website. If you continue to use this site we will assume that you are happy with it.ContinueLearn more