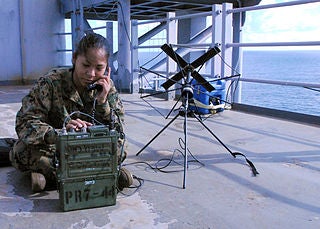 Under the $26m contract, Harris will supply radios for individual warfighters while expanding wideband tactical networking capabilities for the USMC.

The mobile ad-hoc communication network radios will be used to exchange voice, video and tactical data reports for enhanced situational awareness on the battlefield.

Harris RF Communications Department of Defense business president George Helm said that the USMC is procuring Falcon III radios and systems to deploy them as the backbone of its tactical networking initiatives.

"The AN/PRC-117G is field-proven and supports joint operations through its Type-1 implementation of wideband and legacy waveforms," Helm added.

"Harris will supply radios for individual warfighters while expanding wideband tactical networking capabilities for the USMC."

"The radio is also software-defined, which allows for easy upgrades to emerging technologies."

Suited for deployment in joint missions, the extensively tested AN/PRC-117G radio also provides critical real-time information to warfighters on the move, while enhancing unprecedented situational awareness on the battlefield.

More than 30,000 AN/PRC-117G radios have been deployed with all branches of the US DoD and allies, including Canada, the UK, Germany, Australia, Spain and Poland.