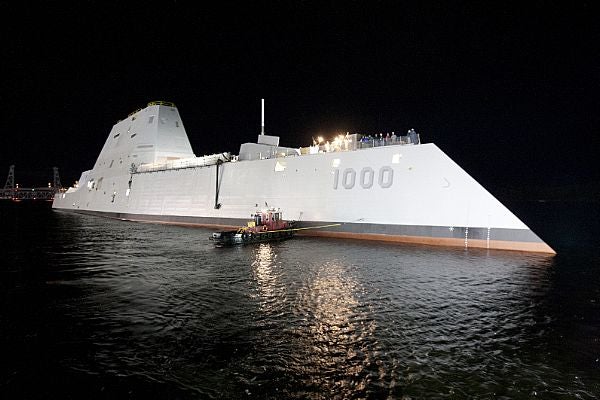 The US Navy’s first Zumwalt-class warship, USS Zumwalt (DDG 1000) has been launched at the General Dynamics Bath Iron’s Maine shipyard.

Designed to provide multi-mission offensive and defensive capabilities, the vessels will be deployed to operate independently or as part of carrier strike groups, surface action groups, amphibious ready groups, and underway replenishment groups.

With construction began in February 2009, DDG 1000 is currently more than 87% complete, while the shipbuilder will carry out remaining work on the hull before delivering the ship to the US Navy.

The US Navy will perform combat systems activation, tests and trials, to include multiple underway periods following the delivery of the ship in late 2014.

"The USS Zumwalt is the company’s largest ship ever constructed and also the US Navy’s largest destroyer."

Scheduled to achieve initial operating capability in 2016, the Zumwalt-class ship will provide independent forward presence and deterrence, support special operations forces, and operate as an integral part of joint and combined expeditionary forces.

The DDG 1,000 next-generation, guided-missile naval ship multi will be the first US Navy surface combatant to use electric power for propulsion and combat technology.

Capable of accommodating a crew of 149, the 610-long ship has a displacement capacity of 15,620t and can support operations of two MH-60R aircraft or one MH-60R aircraft and one VTUAS.