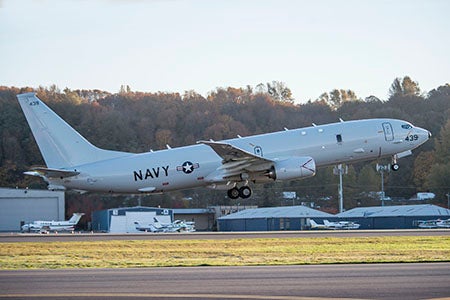 The US Navy is set to declare initial operational capability (IOC) of the Boeing-built P-8A Poseidon long-range maritime patrol aircraft.

Reuters cites sources familiar with the programme as saying that the US Navy will deploy the first aircraft in December 2013, following the IOC decision.

The aircraft is based on Boeing’s 737-800 commercial aircraft and is armed with weapons such as torpedoes, depth charges and Harpoon anti-shipping missiles.

A navy official said that the decision will also allow the US Navy to commission the first squadron of the P-8A aircraft this winter for operational missions.

Declining to comment on the expected decision, Boeing spokesman Chick Ramey said an announcement would be made very soon.

"We have been working hand-in-glove with the navy to help prepare for the first fleet deployment."

"We have been working hand-in-glove with the navy to help prepare for the first fleet deployment," Ramey said.

The aircraft is capable of cruising at a speed of 333km/hr over the sea at a low-altitude of 60m and can fly at a high-altitude at nearly 926km/h using two CFM International CFM56-7B27A high-bypass turbofan engines.

The US Navy is considering procurement of 117 P-8A aircraft to replace its existing turbo-prop P-3 Orion fleet.