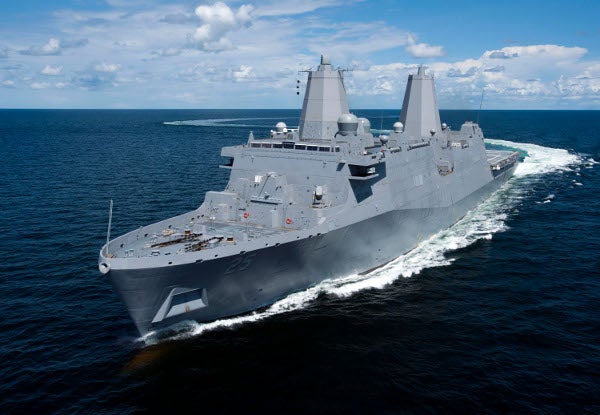 Conducted by Huntington Ingalls Industries (HII), the three-day trials included more than 200 demonstrations, during which the ship’s systems were tested and validated in preparation for final inspection by the US Navy’s board of inspection and survey (INSURV), before delivery.

The vessel validated its anchor handling, flight operations, ballasting and de-ballasting the well deck, and compartment air balancing during the trials.

Huntington Ingalls LPD programme director, Mike Duthu, said: "We have already started preparations for navy acceptance trials, and we are confident that we’ll be ready."

"The company has delivered eight of 11 LPD 17 class ships to the US Navy to date."

Capable of carrying a crew up to 800 while cruising at a speed of 22k, the LPD 24 can transport air cushion (LCAC) or conventional landing crafts, as well as helicopters and the Osprey tilt-rotor aircraft.

The LPD 17 class ships will replace more than 41 ships currently in service with the US Navy including the Austin-class (LPD 4), Anchorage-class (LSD 36), Charleston-class (LKA 113) and Newport-class (LST 1179) of amphibious ships.

Expected to be delivered and commissioned in 2013 and spring 2014 respectively for the navy, the 684ft-long and 105ft-wide LPD 25 ship has been built by HII’s Ingalls shipbuilding division at the Avondale shipyard in Louisiana, US.

The company has delivered eight of 11 LPD 17 class ships to the US Navy to date.

The tenth vessel of the class, John P. Murtha (LPD 26), is 40% complete and will be launched next year while the final ship, Portland (LPD 27) is 8% complete at HII’s Pascagoula shipyard in Mississippi.