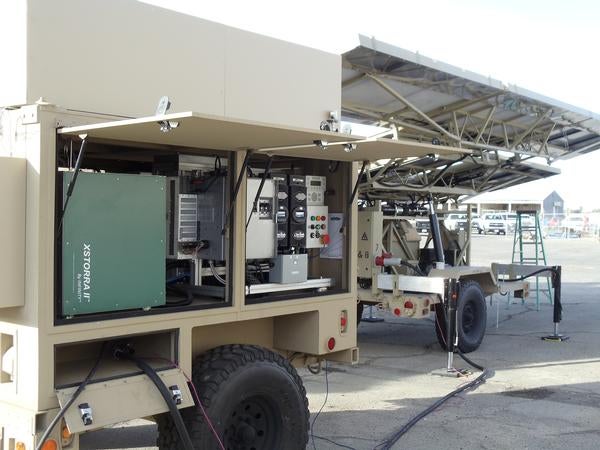 The US Naval Air Warfare Center Weapons Division (NAWCWD) Renewable Energy Office is set to test its new trailer-mounted regenerative fuel cell system in a lab at China Lake, California, US, prior to field testing with troops.

"Since this system only needs water to operate, one of its biggest benefits is reducing the logistics requirements associated with fuel convoys, which could save lives."

Designed to be deployed anywhere, the new environmentally friendly renewable energy system features recyclable fuel cell and an array of solar panels; it is capable of generating around 5,000W of electricity.

An operator will have to initially feed the system with water followed by pointing the solar arrays towards the sun to generate electricity; this is then run through the water to produce hydrogen and oxygen.

The recyclable fuel cells generate energy through electrolysis by using hydrogen in water as fuel.

Producing water and heat as a by-product, the system stores hydrogen and releases oxygen into the atmosphere, eliminating the need of diesel fuel and battery storage, as well as lowers toxic emissions into the air.

The stored hydrogen is again used at night to generate electricity, while the extra solar energy left during after powering a command centre would be put into use to create hydrogen.

"The only by-products are water, which goes into a tank for use the next day, and heat," Malone said.

Renewable Energy Office programme manager Wayne Taylor said: "Since this system only needs water to operate, one of its biggest benefits is reducing the logistics requirements associated with fuel convoys, which could save lives."