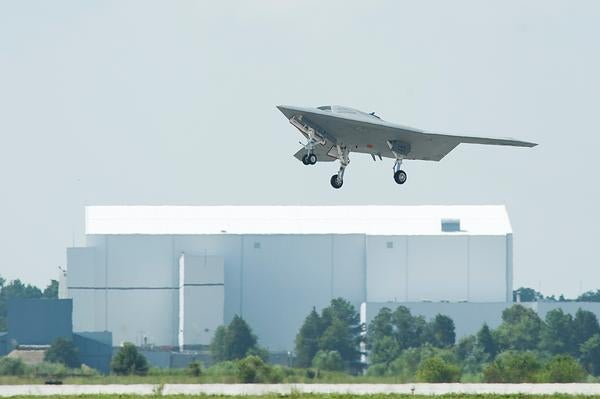 During the flight test over the Chesapeake Bay, the aircraft reached an altitude of 7,500ft while cruising at a speed of 180 knots.

In the coming months, the aircraft is scheduled to undergo further testing to validate its performance in an aircraft carrier environment, using the specialised testing capabilities and facilities at Patuxent River, following which the aircraft will undergo testing at sea.

The US Navy will also conduct land-based testing for the demonstrator to validate its precision approach, as well as its ability to perform arrested landings and catapult launches.

"The X-47B’s flight is another important step closer to the navy’s vision of operating tailless, autonomous, unmanned systems from aircraft carriers."

Operations from a navy aircraft carrier, including launch, recovery, bolter and wave-off performance, will be demonstrated in 2013, while the autonomous aerial refuelling demonstrations are planned for 2014.

Northrop was awarded a contract by the US Navy in 2007 to design, develop and produce two X-47B aircraft under the UCAS-D programme.

The first X-47B is currently undergoing electromagnetic interference testing, aimed to validate its compatibility with the electromagnetic signal environment of an aircraft carrier, while the second UCAS has been recently moved from Edwards Air Force Base to Naval Air Station Patuxent River.