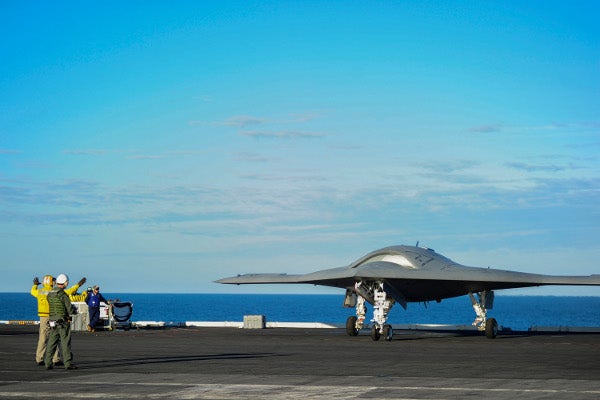 Conducted at Naval Station Norfolk and off the coast of Virginia, the trials involved successful integration of the UCAS demonstrator with Truman’s flight deck using an arm-mounted control display unit (CDU), remotely controlling and moving over the arresting wire, to and from the catapults and to various spotting positions.

"We proved that the X-47B air system is mature and can perform flawlessly in the most hostile electromagnetic environment on earth, a Nimitz-class navy aircraft carrier."

Northrop Grumman Aerospace Systems UCAS-D programme director Mike Mackey said: "We proved that the X-47B air system is mature and can perform flawlessly in the most hostile electromagnetic environment on earth, a Nimitz-class navy aircraft carrier."

Data collected throughout the two-week test period from the aircraft’s performance will contribute to future unmanned aviation programmes, Mackey added.

The tailless aircraft is scheduled to undergo further trials such as shore-based arrested landings at the Naval Air Station (NAS) Patuxent River, as well as use another carrier in mid-2013.

Carrier trials being conducted in spring 2013 will include landings and catapult launches, in addition to arrested landings and aerial refuelling tests.