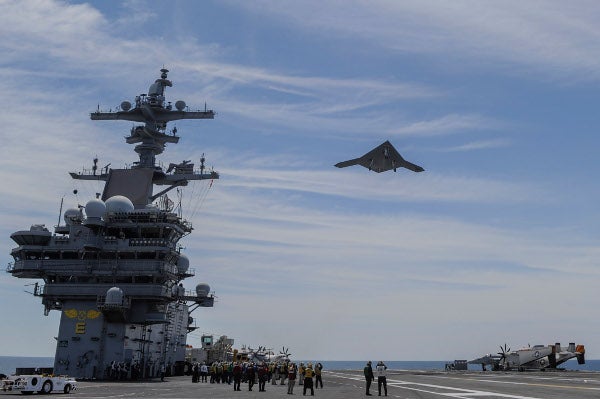 The launch also proved the team’s ability to navigate the X-47B precisely within the controlled airspace aboard the aircraft carrier and seamlessly pass control from a ‘mission operator’ aboard the ship to the Mission Test Control Center at Patuxent River.

"The flight demonstrated that the X-47B is capable of operation from a carrier, hand-off from one mission control station to another."

The deck-handling and ship-integration testing were conducted before the catapult launch to ensure safely operation of X-47B in the unfavourable environment of an aircraft carrier flight deck.

In the next few months, the aircraft is scheduled to undergo additional shore-based testing at NAS Patuxent River with the aircraft then conducting a final carrier-based arrested landing demonstration.

Image: A X-47B UCAS demonstrator flying over the CVN 77 aircraft carrier. Photo: courtesy of US Navy, from Northrop Grumman by Alan Radecki/Released.