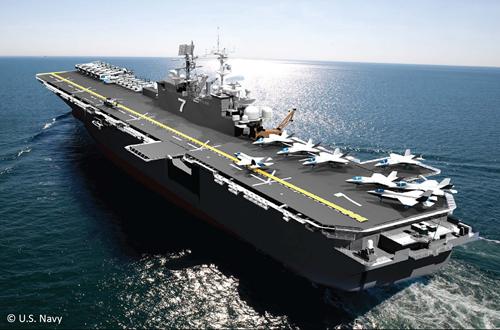 The $10m contract was awarded based on the fuel efficiency achieved from similar equipment already installed on other US Navy ships, including the USS Makin Island (LHD-8) and USS America (LHA-6).

GE Power Conversion business marine vertical leader Paul English said that the hybrid propulsion technology on USS Makin Island has helped the US Navy save more than four million gallons of fuel worth $15m during its seven-month maiden deployment.

"This project will allow the US Navy to lower operating costs due to fuel savings provided by a more efficient power and propulsion system," English said.

"It also will help reduce routine maintenance costs and time, as well as enable a smaller carbon footprint due to lower fuel expenses."

"This project will allow the US Navy to lower operating costs due to fuel savings provided by a more efficient power and propulsion system.”

APS has been designed to serve as fuel-saving alternative during low-speed operations of the ship since the gas turbine propulsion system are less fuel efficient compared with electrical propulsion system.

Powered by a fuel-efficient, the 844ft-long and 106ft-wide USS Tripoli has a displacement capacity of 44,971t and can carry a crew of 1,059 as well as marine helicopters.

Work will be performed at GE’s Pittsburgh facility in Pennsylvania, with operation for the USS Tripoli scheduled to start in April 2015.

Image: USS Tripoli (LHA-7) ship will be integrated with a fuel-saving auxiliary propulsion system. Photo: courtesy of US Navy.