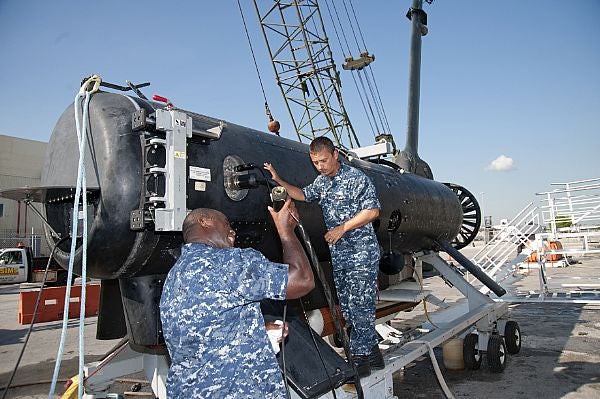 The US Navy has successfully completed the launch handling and recovery testing of the remote multi-mission vehicle (RMMV) aboard the Independence-variant littoral combat ship (LCS) USS Independence (LCS 2).

During the trial, the RMMV has been launched and recovered at sea and demonstrated its design improvements, recovery equipment and the ship’s twin boom extensible crane (TBEC).

In addition, the unmanned offboard vehicle also demonstrated 23 hours of continuous in-water operations along with its AN/AQS-20A sonar, as part of the testing.

The LCS mission modules test and evaluation assistant programme manager, Michelle Clark, said about twelve dozen successful launch and recovery missions have been conducted by the mine countermeasures detachment and test team.

"The RMMV can be used for detection, classification and localisation of mine-like contacts."

As part of the mine countermeasures mission (MCM) package, one of three packages being developed for the US Navy’s LCS programme, the RMMV can be used for detection, classification and localisation of mine-like contacts and mine identification of bottom mines.

Capable of providing a visual image and a contact data list for operators, the AN/AQS-20A is fitted with five separate sonar / sensors in a compact, lightweight and hydro-dynamically stable towed body to localise mine-like objects.