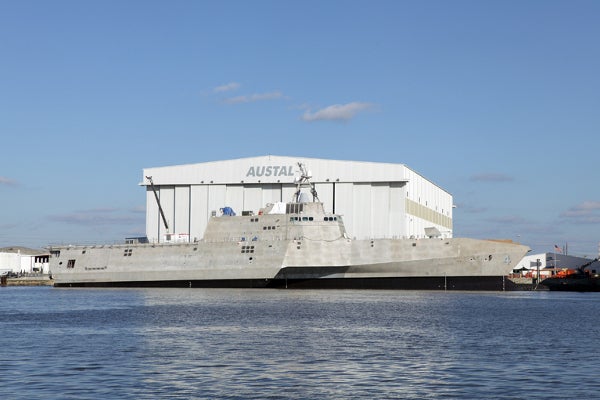 During the off test, Austal demonstrated the 57mm gun’s ability to target another ship from the bridge of the LCS, paving its entry into the formal combat systems test and certification process cycle.

The navy awarded a $3.5bn contract to Austal to build and deliver an additional ten LCSs to join USS Independence (LCS 2), which was commissioned in January 2010.

Designated as LCS 4, the automated and networked surface combatant vessel is currently undergoing final outfitting and activation at Austal’s facility before preparing to perform sea trials.

The 127m-long, high-speed, highly manoeuvrable combat ship has a full-load displacement of 2,637t, an operational range of 4,300nm and can cruise at a speed of 40knots.

The LCS programme aims to fill the critical, urgent operational combat requirements gaps currently in the navy for defeating littoral threats and provide access and dominance in coastal waters.

“The automated and networked surface combatant vessel is currently undergoing final outfitting and activation at Austal’s facility before preparing to perform sea trials."

Designed to support launch and recovery operations of manned and unmanned vehicles, the ships can execute mine warfare, anti-submarine warfare and surface warfare missions and also support countering piracy and drug-trafficking in shallow coastal waters and providing humanitarian relief.

The US Navy intends to procure a total of 55 LCSs for multi-mission support to establish and maintain its dominance in the littorals and sea lanes of communication choke points around the world.

General Dynamics Advanced Information Systems has teamed up with Austal to serve as the ship systems integrator for the LCS programme and is responsible for the design, integration and testing of the ship’s electronic systems including the combat system, networks, and seaframe control.