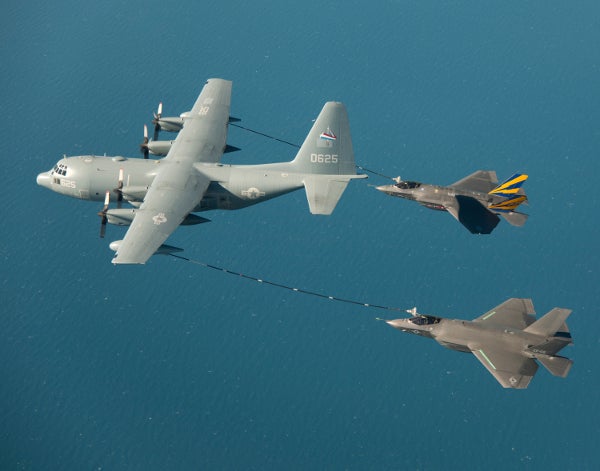 During the tests, the two aircraft, CF-1 and CF-2, were refuelled at the same time with a Lockheed Martin-developed KC-130 Hercules aircraft, marking a milestone as part of an F-35 flight test programme.

“The F-35C can fly at a maximum speed of 1,960km/h and can be launched through steam catapult and recovered by using tailhook arrestor.”

The stealthy, supersonic multi-role F-35 Joint Strike Fighter (JSF) is currently under development by Lockheed and has been undergoing flight tests since late 2006.

The aircraft is also being developed in two other variants, conventional takeoff and landing (CTOL) variant for the US Air Force, and a short takeoff and vertical landing (STOVL) aircraft for the US Marine Corps and the UK Royal Navy.

Powered by a single Pratt & Whitney F135 turbofan engine, the F-35C can fly at a maximum speed of 1,960km/h and can be launched through steam catapult and recovered by using tailhook arrestor.

The first CV aircraft is scheduled to be delivered later this year to join an F-35 pilot and maintainer training programmes and is likely to be operational in 2015.