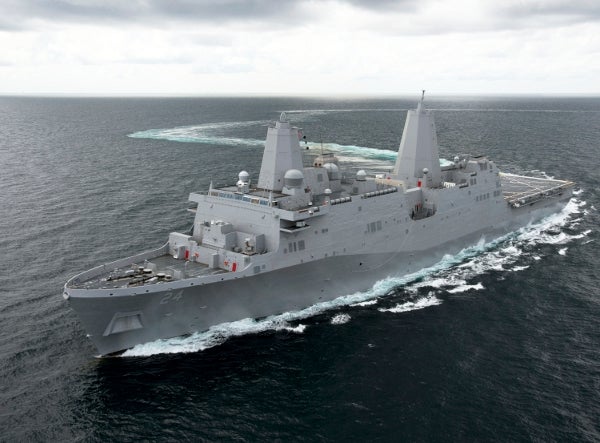 Conducted by Huntington Ingalls Industries (HII), the three-day trials included more than 200 demonstrations, during which the ship’s systems were tested and validated in preparation for final inspection by the US Navy’s Board of Inspection and Survey (INSURV), before delivery.

The vessel validated its anchor handling, flight operations, ballasting and de-ballasting the well deck, and compartment air balancing, during the trials.

Arlington is due to undergo acceptance trials in October 2012, following which the ship will be delivered to the US Navy.

"LPD 24 proved her seaworthiness with strong performance in several different tests, including the ship’s propulsion, steering, navigation, communications and weapons."

Capable of carrying a crew up to 800 while cruising at a speed of 22k, LPD 24 can transport air cushion (LCAC) or conventional landing crafts, as well as helicopters and the Osprey tilt-rotor aircraft.

In addition to improving firepower, the ship will provide enhanced vehicle lift-capability and cargo-carrying capacity.

The LPD 17 class ships will replace more than 41 ships currently in service with the US Navy including the Austin-class (LPD 4), Anchorage-class (LSD 36), Charleston-class (LKA 113) and Newport-class (LST 1179) of amphibious ships.

The company has delivered six of 11 LPD 17 class ships to the US Navy to date, while the remaining five vessels, including LPD 24, are at various stages of construction.