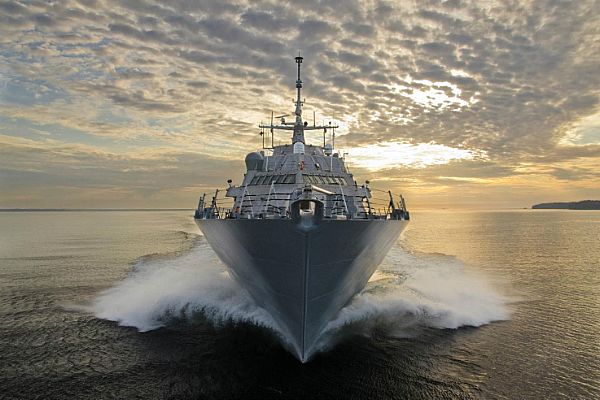 The US Navy is set to evaluate a new design of high-power density waterjets on its fifth Freedom-class littoral combat ship (LCS-5), USS Milwaukee, to help prevent damage to the propeller and rudder.

Designed in collaboration with the Office of Naval Research (ONR) and the Naval Surface Warfare Center, the Rolls-Royce Naval Marine-developed Axial-Flow Waterjet Mk-1 aims to enhance the ship’s speed while lowering costs.

The LCS will be integrated with four waterjets, with each able to displace nearly half a million gallons of seawater a minute, delivering increased thrust per unit to help the ship achieve speeds in excess of 40k.

Originally intended for a cancelled ship programme, the waterjets design was refocused to improve the performance of LCS and reduce maintenance costs associated with cavitation on propellers.

Full-scale sea trials on Milwaukee (LCS 5) with the waterjets will be conducted over the next 24 months, following then the new equipment could be scheduled for use on all ten Lockheed Martin-built LCS.

USS Milwaukee is currently under construction at the Marinette Marine shipyard in Wisconsin, US, and is due to be delivered to the US Navy in 2014.

"Full-scale sea trials on LCS 5 with the waterjets will be conducted over the next 24 months."

The US Navy will receive a total of 20 LCS in two different hull designs, costing $480m each between 2010 and 2015 from Lockheed and Austal.

Under a $3.5bn contract awarded by the navy, Austal will build and deliver an additional ten Independence-class aluminum trimaran LCSs while the Lockheed team, including Marinette Marine Corporation (MMC), will construct ten Freedom-class semi-planing monohull ships.

LCS ships will support launch and recovery operations of manned and unmanned vehicles and can conduct specific missions, including mine warfare, anti-submarine warfare and surface warfare.

The LCS programme aims to meet the urgent operational combat requirements vessels to defeat littoral threats and the ability to carry explosives and counter terrorists on small, fast, armed boats.