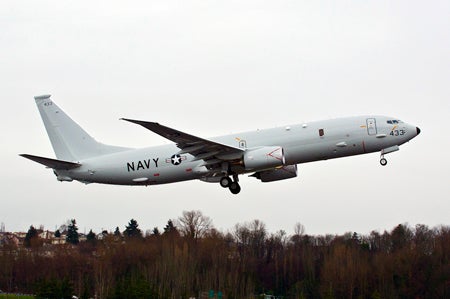 Boeing has successfully delivered the sixth and final P-8A Poseidon maritime multi-mission production aircraft to the US Navy, as part of the first low-rate initial production (LRIP) contract awarded in 2011.

A total of 24 P-8A maritime patrol aircraft are scheduled to be delivered by the company to the navy under contracts awarded in 2011 and 2012.

The LRIP contracts also include procurement of aircrew and maintenance training, as well as logistics support, spares, support equipment and tools.

Maritime Patrol and Reconnaissance Aircraft programme manager captain Scott Dillon said: "The first fleet squadron is now equipped with P-8s, and will soon deploy with a maritime patrol capability that is greatly enhanced, relative to our legacy P-3 force."

Armed with torpedoes, depth charges, harpoon anti-shipping missiles and other weapons, the P-8A supports shipping interdiction missions and can serve in an electronic intelligence role.

"We’ve reduced flow times and costs, which ultimately benefits our US Navy customer."

The US Navy is considering procurement of 117 P-8A aircraft, to replace its existing turbo-prop P-3 Orion fleet.

Currently, the company is installing mission systems and performing evaluations on the next three Poseidon aircraft in Seattle, Washington, while two other aircraft are in the final assembly phase in Renton, Washington, US.

Boeing is scheduled to deliver the seventh P-8A jet to the US Navy in the first quarter of 2013.

Image: US Navy’s P-8A Poseidon takes off from a base. Photo: courtesy of Boeing.