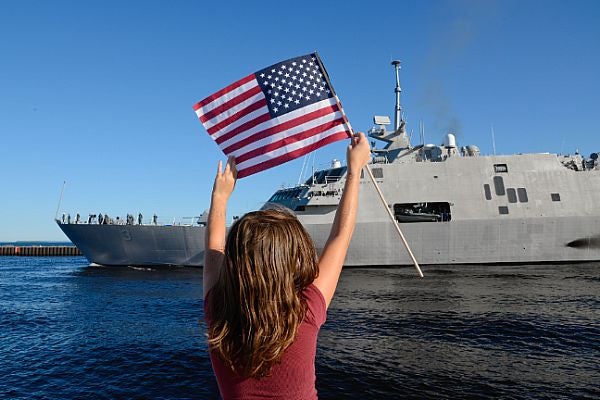 The US Navy’s newest Freedom-class littoral combat ship (LCS), the future USS Fort Worth, will be commissioned into service on 22 September at Galveston, Texas.

The ship has already departed from Marinette Marine shipyard in Wisconsin and following the commissioning ceremony it is scheduled to sail to its San Diego homeport in California.

The vessel underwent acceptance trials with the Navy’s Board of Inspection and Survey (INSURV) in May, during which the board tested the ship’s propulsion plant, ship handling and auxiliary systems.

LCS programme executive officer rear admiral James Murdoch said: "This ship is well-built and will provide a tremendous capability to the fleet."

With several baseline design changes incorporated, Fort Worth will be equipped with reconfigurable payloads, called mission packages, which can be quickly set up to carry out mine countermeasures, surface warfare and anti-submarine warfare.

The Freedom-variant LCSs include USS Freedom (LCS 1), being prepared for second deployment, while Milwaukee (LCS 5) and Detroit (LCS 7) are currently under construction.

Little Rock (LCS 9) and Sioux City (LCS 11) are in the early stages of planning and material procurement, which were funded in March 2012.

The US Navy will receive a total of 20 ships in two different hull designs, costing $480m each between 2010 and 2015 from Lockheed and Austal.