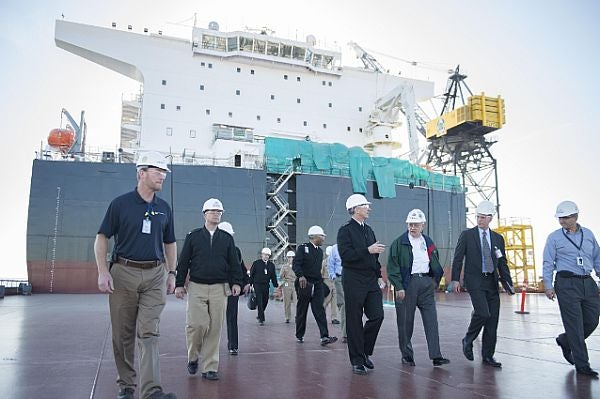 The US Navy will christen the first mobile landing platform (MLP) ship ‘USNS Montford Point’ (T-MLP 1), in San Diego, California, US, on 2 March.

USNS Montford Point will be named to honour approximately 20,000 African-American Marine Corps recruits who trained at the North Carolina facility from 1942 to 1949 and achieved Congressional gold medals.

US Navy secretary Ray Mabus said: "I chose to name the department’s new MLP Montford Point as a way to give some long-overdue recognition to these proud Americans who gave so much in the defence of our nation."

MLP vessels are a new class of auxiliary support ship, designed to serve the navy and marine corps as a transfer station or floating pier at sea to deliver equipment and cargo from sea to shore, or when access to other bases is denied.

General Dynamics National Steel and Shipbuilding (NASSCO)-built MLP 1 ship can cruise at a maximum speed of about 20k and can accommodate a crew of 1,112, along with their equipment.

“I chose to name the department’s new MLP Montford Point as a way to give some long-overdue recognition to these proud Americans who gave so much in the defence of our nation."

The flexible, modular platform will join the three maritime prepositioning force squadrons of the US Navy, which are strategically placed worldwide to enable rapid response for disasters or crises, as well as reduced dependency on foreign ports.

USNS John Glenn (MLP 2) and USNS Lewis B Puller (MLP 3), the second and third MPL-class ships respectively, are currently under construction at NASSCO.