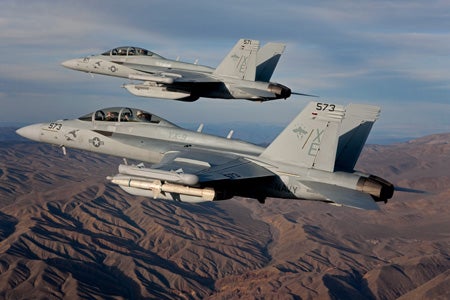 The US Navy has issued stop-work order to Raytheon on the next-generation electronic jamming system contract, following BAE Systems’ official bid protest against the contract.

On 15 July, BAE had filed a formal protest against the US Naval Air Systems Command’s (NAVAIR) $279.4m contract award to Raytheon, to provide support for the technology development phase of the Next Generation Jammer (NGJ) programme.

Earlier, Reuters news agency cited BAE spokesman Brian Roehrkasse as a saying that BAE has decided to file a protest against the US Navy contract award due to ‘concerns with the Navy’s evaluation of our offering’.

"The solution we put forward would provide the US Navy with an affordable and effective way to significantly enhance current capabilities and protect our aircraft, ships, and armed forces," Roehrkasse added.

The case was filed under Government Accountability Office (GAO) attorney Christina Sklarew and is due on 23 October.

US Navy spokeswoman captain Cate Mueller said, "Until the GAO determines the merits of the protest, which typically occurs within 100 days of a filing, we won’t have further comment regarding it."

Raytheon was selected to design and build critical technologies for the NGJ pod, which will replace the aging ALQ-99 tactical jamming system onboard the US Navy’s EA-18G Growler electronic-attack aircraft, as part of the 22-month cost-plus-incentive-fee contract.

Scheduled to enter service in fiscal 2020, the NGJ will provide increased jamming capabilities to the US troops, needed to sustain the future missions.