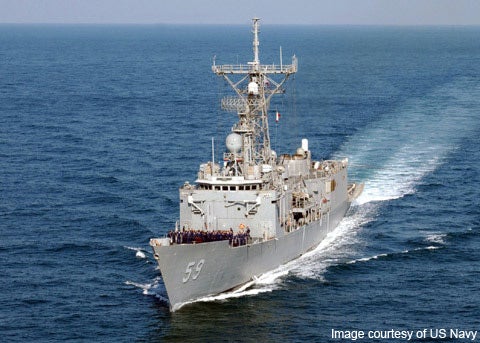 UTC Aerospace Systems has successfully delivered its latest sonar dome rubber window to the US Navy, bringing the total to more than 150.

Aerostructures president Marc Duvall said: "We have a long history of innovation in building quality components that support anti-submarine warfare capabilities for the US Navy’s powerful surface fleet."

"We have a long history of innovation in building quality components that support anti-submarine warfare capabilities."

Jointly manufactured by Ingalls Shipbuilding and Bath Iron Works, the 172.8m-long Ticonderoga-class ships have a displacement capacity of 3,500t and can cruise at a maximum speed of 30k using four LM 2500 gas turbine engines.

Capable of accommodating a crew of 17 officers and 198 enlisted, the Bath Iron Works and Todd Shipyards-built Oliver Hazard Perry-class ships have a full load displacement of 4,100t and cruise at a maximum speed 30k.

The sonar dome rubber window has been manufactured at the company’s facility in Jacksonville, Florida, US to the US Navy. EPP also provides field services for the installation, inspection, and repair of its sonar domes In support of customers.