US Navy to retain four Ticonderoga-class cruisers in service
Menu 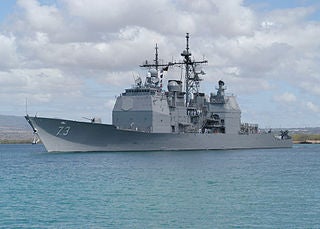 The US Navy is likely to retain the operational service life of its four Aegis-equipped, Ticonderoga-class guided missile frigates, USS Cowpens (CG-63), USS Anzio (CG-68), USS Vicksburg (CG 69) and USS Port Royal (CG-73), which were due for decommissioning in March 2013.

A navy spokesperson at the Pentagon lieutenant Courtney Hillson was quoted by Defense News as saying: "The navy intends to retain these ships in service pending completion of the fiscal year 2013 authorisation and appropriation process, or other agreement with Congress."

In addition to the four Ticonderoga-class ships, the navy is scheduled to retire three other cruisers and two amphibious ships in 2014.

"The navy intends to retain these ships in service pending completion of the fiscal year 2013 authorisation and appropriation process, or other agreement with Congress."

Currently, USS Cowpens is in the Western Pacific, USS Anzio is participating in an international exercise in the Caribbean and USS Vicksburg is escorting USS Enterprise aircraft carrier in the Arabian Sea.

The USS Port Royal, which was damaged in Hawaii in early 2009, is expected to be based at its home port in Pearl Harbor, Hawaii, US and is still facing problems despite expensive repairs.