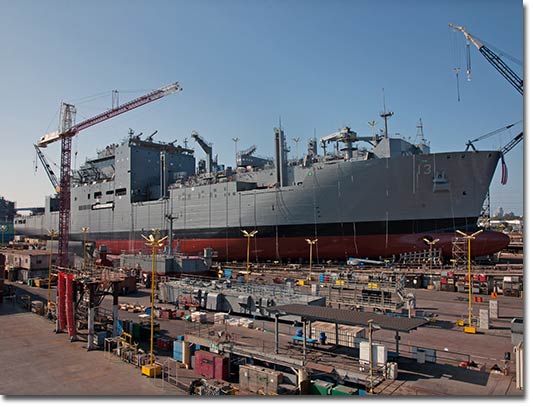 Nassco had received an additional contract for the construction T-AKE 13 and USNS Cesar Chavez (T-AKE 14) in 2010, as part of the navy’s T-AKE acquisition programme for 14 ships with a total value of $3.7bn.

General Dynamics Nassco president Fred Harris said that the Medgar Evers had completed successful sea trials three weeks ago and was ready to serve along with the other 12 T-AKE ships currently in service with the Navy performing various roles.

Named in honour of US Army veteran and civil rights activist Medgar Evers, T-AKE 13 will be used by the navy’s MSC primarily to transport US Marine Corps equipment overseas.

T-AKE frigates have a cargo capacity of more than 10,000t, can cruise at a maximum speed of 20k and are designed to deliver food, ammunition, fuel and other provisions from shore stations to combat ships at sea.

The final and fourteenth ship of the class, USNS Cesar Chavez, is scheduled for launch on 5 May 2012 and will be delivered to the US Navy in the fourth quarter of 2012.

Of the 14 ships, 11 will serve as CLF ships and the remaining three will be part of the Maritime Prepositioning Force.