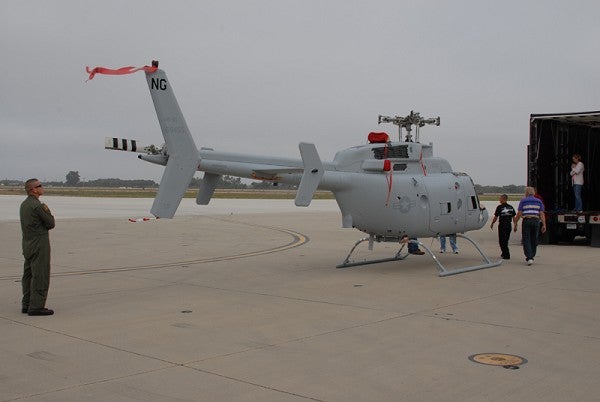 The US Navy has received the first upgraded MQ-8C Fire Scout unmanned aerial vehicle (UAV) from Northrop Grumman, in preparation for ground and flight testing.

The UAV will initially undergo ground testing to demonstrate its ability to communicate with the ground control station, followed by flight trials to validate its technology.

"Testing on the naval air systems command test range provides us with extended air space to conduct and demonstrate long endurance and systems testing in a maritime environment," Vardoulakis said.

"The endurance upgrade doubles the time on station of the MQ-8 system."

"The endurance upgrade doubles the time on station of the MQ-8 system, and will help reduce the workload for the ship’s crew by cutting the number of times the crew will need to be in flight quarters."

The upgraded MQ-8 system features a modified commercially available airframe to provide enhanced range, more than double the endurance and three times the payload capacity when compared to the MQ-8B variant.

Currently in service onboard the US Navy aircraft carriers, the MQ-8B is also used in Afghanistan to provide intelligence, surveillance and reconnaissance capabilities to maritime and ground commanders.

The new MQ-8C Fire Scout is capable of vertical take off and landing, and provides the navy with extended range, payload and cargo hauling capabilities.

The MQ-8C UAV’s first operational deployment with the US Navy is scheduled in 2014.

Image: A US Navy’s MQ-8C UAV. Photo: courtesy of US Navy.