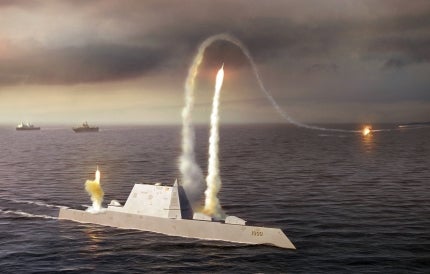 The US Navy has received the first dual-frequency hull-mounted sonar, the AN/SQQ-90 tactical sonar suite, from Raytheon for its DDG 1000-class multi-mission destroyer.

"Integrated with DDG 1000’s open architecture combat system and multi-sensor capabilities, AN/SQQ-90 will provide superior operational performance in both the littorals and deep waters against a multitude of targets, including mines and quiet diesel submarines," Peppe added.

The delivery of the sonar marks a major advancement in undersea warfare capability that will provide broad warfighting coverage to the ship as well as the completion of electronics deliveries for DDG 1000’s hull-mounted sonar suite.

The sonar electronics were assembled and integrated by Raytheon into an Electronic Modular Enclosure (EME) to power and control the Zumwalt-class destroyer’s sonar.

The EME, which are large subsystem assemblies, also contain the transmit/receive amplifiers and associated processors that aid in the distribution of signals and data to the ship’s command centre.

Apart from providing upfront integration and testing before delivery to the shipyard for ship installation, the EME maximises efficiencies in power and cooling while minimising the size and weight occupied onboard the ship.

The sonar can be operated by one-third the crew of current Aegis platforms through automation and unique information management.

Raytheon has been the AN/SQQ-90 systems integrator for the US Navy.

The multi-mission Zumwalt-class DDG 1000 is a next-generation, guided-missile naval destroyer and is designed to provide independent forward presence and deterrence for carrying out operations in the littorals as well as during land attack.

The DDG 1000 will be the first US Navy surface combatant to use electric power for propulsion and the war-fighting technology provides incomparable capability to counter emerging threats.

Image: The multi-mission Zumwalt-class DDG 1000 vessels are expected to enter into service as of April 2013.