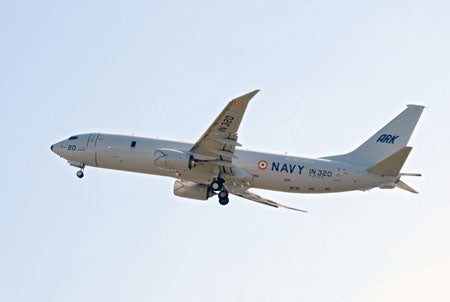 The US Navy has awarded a third low-rate initial production (LRIP) contract valued at $1.9bn to Boeing to develop and deliver 11 P-8A Poseidon maritime reconnaissance aircraft to increase its marine combat, intelligence, surveillance and scouting capabilities.

It follows two previous LRIP awards to Boeing in 2011 to deliver 13 P-8A aircraft, which also includes the provision of spare parts, logistics and training devices in addition to aircrew and maintenance training.

Boeing vice president and P-8 programme manager Chuck Dabundo said: "This contract is a stepping stone to full-rate production, and our focus remains on building Poseidon on cost and on schedule."

Capable of conducting broad-area, maritime and littoral operations, the Poseidon long-range aircraft can engage in an electronic intelligence role and operates in conjunction with the broad area maritime surveillance unmanned aerial vehicle.

"This contract is a stepping stone to full-rate production, and our focus remains on building Poseidon on cost and on schedule."

Equipped with upgraded APS-137D(V)5 maritime surveillance radar and signal intelligence SIGINT system, the aircraft design is based on Boeing’s 737-800 commercial aircraft and is armed with weapons such as torpedoes, depth charges, and Harpoon anti-shipping missiles.

The third phase of the LRIP brings the number of P-8A aircraft ordered to 24, with further purchases planned of a total of 117 aircraft planned.

Currently, the US Navy is using the first three production aircraft for crews training at Naval Air Station Jacksonville, Florida, US, while replacing its existing turbo-prop P-3 Orion fleet.

As part of a navy system development and demonstration contract awarded in 2004, the team is currently testing six flight-test and two ground-test aircraft.