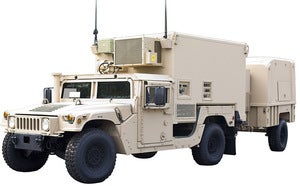 The US Navy has awarded a contract to Smiths Detection to supply additional mobile weather information systems in support of mission planning and military operations for the US Marine Corps (USMC).

Under the $7.6m contract, the company will deliver its Meteorological Mobile Facility (Replacement) Next Generation (METMF(R) NEXGEN) systems to the navy.

Designed as a truck-mounted system, METMF(R) NEXGEN uses mesoscale meteorological model to collect data from a wide range of sources and generates a complete view of existing and future weather conditions through a forecaster tool kit in a few minutes.

In addition to providing continuous meteorological observations, satellite imagery, and forecasts, the METMF(R) NEXGEN system is up-armoured for force protection and is ruggedised for survivability.

The Marine Air Ground Task Force (MAGTF) uses tactical meteorological information, which has been transferred by the system to both ground-based sensors and satellites, to make critical mission-related decisions during operations.

These systems are currently in service with the US Army on the Meteorological Measuring Set-Profiler, a next-generation upper atmospheric measuring system used to increase the accuracy of field artillery.

To date, the company has delivered 100 earlier-generation artillery meteorological systems to the US Army, USMC and US National Guard.

Work under the contract will be carried out at the company’s Edgewood facility in Maryland, US, followed by deliveries to the navy by July 2013.