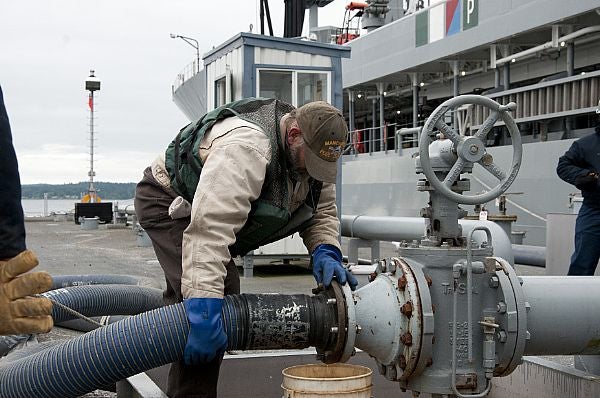 The US Naval Supply Systems Command (NAVSUP) Fleet Logistics Center (FLC) has delivered nearly one million gallons of a 50/50 blend of renewable biofuel to the Military Sealift Command (MSC) for ships participating in the Rim of the Pacific (RIMPAC) Exercise 2012.

A total of 884,000 gallons of the 50/50 blend has been transferred to the USNS Henry J Kaiser (T-AO 187) as a part of the initial stage of Great Green Fleet programme.

The US Navy’s green fleet initiative is aimed at reducing petroleum consumption in its commercial vehicle fleet to 50% by 2015 and to use 50% of all of its energy from alternative fuels by 2020.

During the exercise, the US Navy’s green fleet surface combatants and carrier-based aircraft will test and evaluate the cross-platform utility and functionality of biofuels.

"The US Navy’s green fleet initiative is aimed at reducing petroleum consumption in its commercial vehicle fleet to 50% by 2015 and to use 50% of all of its energy from alternative fuels by 2020."

MFD deputy director Bob Cairns said that the navy blended HRD-76 and HRJ-5 with regular F76 and JP5 on the barge to a 50/50 blend and re-circulated the fuel to make sure it was fully blended. The blend was then authorised for use following successful tests.

The exercise involves the participation of navies from Australia, Canada, Chile, Colombia, France, India, Indonesia, Japan, Malaysia, Mexico, Netherlands, New Zealand, Norway and Peru, in an effort to maintain the peace and stability of the Pacific region.

RIMPAC 2012 is the 23rd in the series that began in 1971 and is aimed at providing training opportunities for participants to bolster and sustain critical cooperative relationships, while ensuring the safety of sea lanes and security.