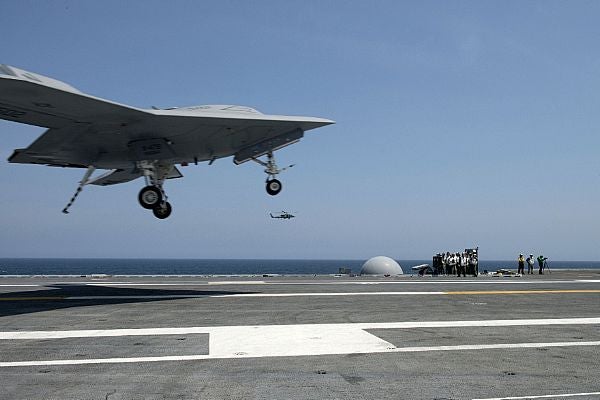 Marking a step ahead in integrating the unmanned aircraft systems seamlessly into navy carrier operations, the landing trial has been conduct as final part of three at-sea test periods for X-47B programme.

During testing, the X-47B aircraft caught the three-wire with the aircraft’s tailhook following its 35-minute travel from the Naval Air Station (NAS) Patuxent River, Maryland, US, to the aircraft carrier.

The unmanned system performed the arrested landing effectively by stopping from a speed of 145k in less than 350ft, while a mission operator aboard the carrier took control of the aircraft and monitored the flight operations.

"Successful arrested landings points back to a rigorous test plan focused on software development and system maturity to prove that an autonomous unmanned system such as the X-47B can safely, seamlessly and predictably integrate into navy carrier operations."

Further arrested landing trial has been conducted by the UCAS-D using the ship’s catapult shortly after completing initial landing off the carrier.

Northrop Grumman Aerospace Systems vice-president and Navy UCAS programme manager Carl Johnson said: "Although it looks like it could be an easy maneouvre, today’s successful arrested landings points back to a rigorous test plan focused on software development and system maturity to prove today that an autonomous unmanned system such as the X-47B can safely, seamlessly and predictably integrate into navy carrier operations."

The 38.2ft-long tailless autonomous aircraft will be fitted with both probe-and-drogue for the US Navy as well as boom-receptacle mechanisms for the USAF for autonomous air refuelling.