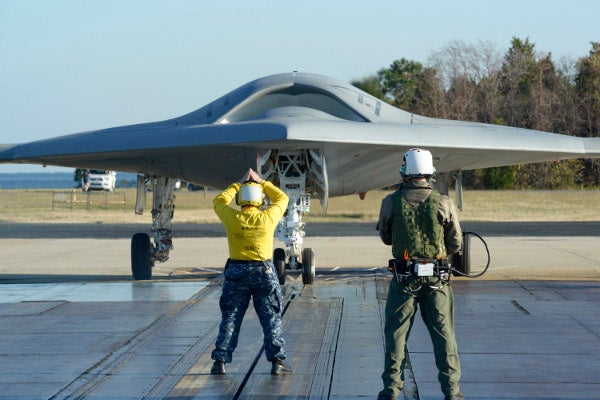 The US Navy and Northrop Grumman have successfully completed the first land-based catapult launch of the X-47B unmanned combat air system (UCAS) demonstrator at a shore-based catapult facility at Naval Air Station Patuxent River, Maryland, US.

During the test, which forms part of a series of such trials, the Northrop-built control display unit (CDU) was used to perform flights in simulated environments.

The X-47B performed test flights in a typical ship holding pattern, as well as a carrier approach flight profile, while enabling the test team to collect related information on precision navigation with each manoeuvre.

Designed to enable the flight deck operator to control and manoeuvre the X-47B UAS on the flight deck, the CDU is a wireless, arm-mounted controller used to move the system into the catapult, disengaging it from the carrier's arresting wires and quickly transporting it out of the landing area.

"The N-UCAS programme's goal is to demonstrate integration of an unmanned aircraft into a carrier environment and reduce technical risk associated with developing potential future unmanned, carrier-compatible systems."

A series of deck handling trials of the X-47B demonstrator will also be conducted onboard the US Navy's eighth Nimitz-class aircraft carrier USS Harry S Truman (CVN 75) in December, following the completion of ground-based catapult test flights and final flight software validation.

In 2013, the programme aims to validate the X-47B's performance to safely operate from a US Navy aircraft carrier, including conducting launch, recovery, and air traffic control operations.