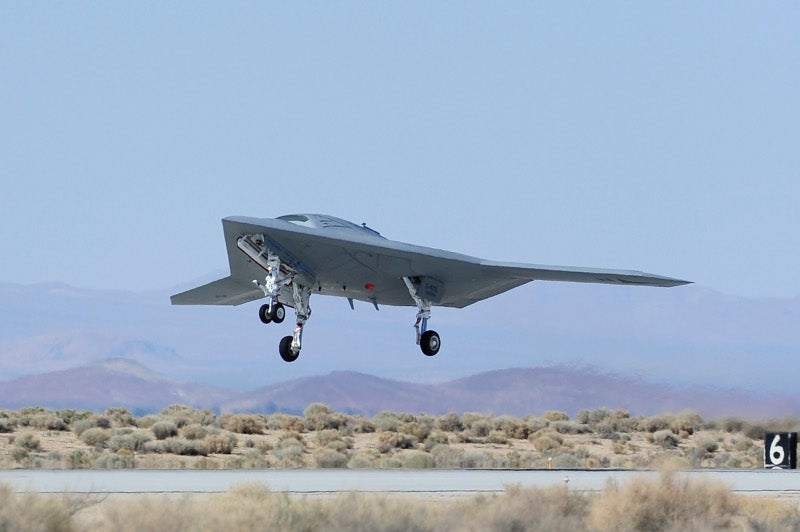 Northrop Grumman and the US Navy have successfully completed the airworthiness test phase of X-47B unmanned combat air system (UCAS) demonstrator aircraft at Edwards Air Force Base (AFB), California, US.

Consisting of 23 flights by two air vehicles, the test phase proved X-47B’s ability to perform at all speeds, weights and altitudes associated with the Navy’s UCAS-D programme.

US Navy UCAS programme manager captain Jaime Engdahl said that the initial test phase at Edwards Air Force Base was successful and the air vehicles would prepare for shore-based carrier suitability tests in the fall.

"The X-47B flight test programme at Edwards demonstrated convincingly the maturity, durability and performance of this revolutionary new unmanned system."

X-47B software will be finalised by the Northrop team, required to enter carrier suitability testing, which includes catapult launches, arrested landings and wireless remote deck handling of the aircraft.

The US Navy awarded a contract to Northrop in 2007 to design, develop and produce two X-47B aircraft for the US Navy under the UCAS-D programme.

The first X-47B is currently undergoing electromagnetic interference testing, aimed to validate its compatibility with the electromagnetic signal environment of an aircraft carrier, while the second UCAS has been recently moved from Edwards AFB to Naval Air Station Patuxent River.

Operations from a Navy aircraft carrier, including launch, recovery, bolter and wave-off performance, will be demonstrated in 2013, while the autonomous aerial refuelling demonstrations are planned for 2014.