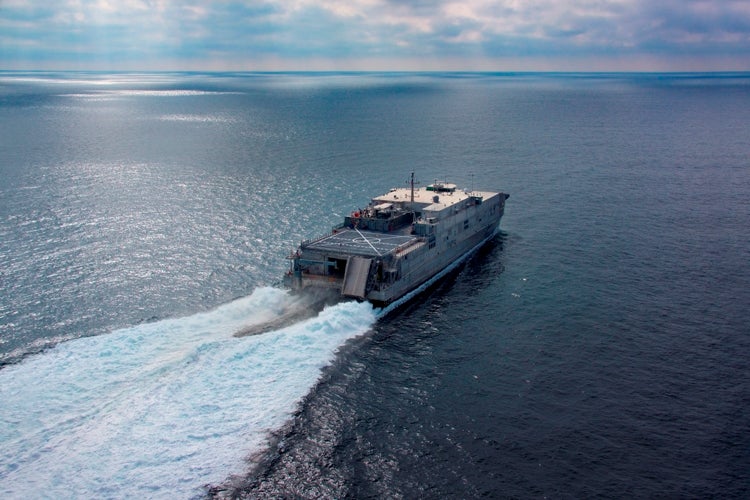 The US Navy will name its next Spearhead-class joint high-speed vessel (JHSV) as USNS Millinocket, navy secretary Ray Mabus has revealed.

"I chose to name the joint high-speed vessel after East Millinocket and Millinocket to honour those values and the men and women of the community that represents them no less today than it did in the early 1900s," Mabus said.

The future USNS Millinocket will be built by Austal as part of a $1.6bn contract awarded by the US Navy in November 2008 to build the first JHSV, with options to construct nine additional vessels between 2009 and 2013.

The Navy has also recently awarded a $321.7m follow-on contract to the company for the construction of the eighth and ninth JHSVs.

The 103m-long JHSV has been designed to transport troops and equipment, military vehicles, cargo and equipment for a range of global missions.

"I chose to name the joint high-speed vessel after East Millinocket and Millinocket to honour those values and the men and women of the community that represents them no less today than it did in the early 1900s."

Capable of reaching speeds in excess of 35k when fully loaded, the JHSV can perform day and night air vehicle launch and recovery operations while operating in shallow-draft ports and waterways.

The JHSV features a flight deck for helos and a slewing vehicle ramp on the starboard quarter that facilitates the use of austere piers and quay walls.

The first JHSV is currently undergoing sea trials, while Choctaw County (JHSV 2) is in its final stage of construction.

USNS Millinocket will be designated as a US naval ship on its delivery to the US Navy's Military Sealift Command (MSC).

Work on Millinocket will be carried out at Austal's facility in Mobile, Alabama, US.