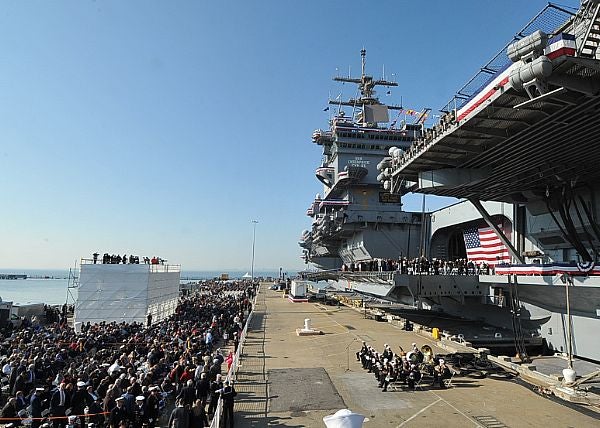 The name has been selected to honour the US Navy’s first nuclear-powered aircraft carrier, CVN 65, which has served the country for more than five decades.

"The aircraft carrier has been designed to provide improved combat capabilities during crisis response and humanitarian relief missions."

The future USS Enterprise Ford-class aircraft carrier will be designated as CVN 80. It is the ninth vessel to have the name ‘Enterprise’.

Being constructed by Huntington Ingalls Industries (HII), the 1,092ft-long aircraft carrier will have a beam of 134ft and will feature a flight deck that will be 256ft wide.

Capable of cruising at a speed in excess of 34k, the aircraft carrier has been designed to provide improved combat capabilities during crisis response and humanitarian relief missions, as well as reducing lifecycle costs for sailors.

The aircraft carrier and its strike group will provide forward presence, rapid response, endurance on station, and multi-mission capabilities throughout its service life.

HII’s Newport News Shipbuilding (NNS) division is serving as the prime contractor for the work, and the first and second carriers are expected to be delivered between 2015 and 2022.

Commissioned in 1961, the existing 94,781t USS Enterprise was inactivated on 1 December in Norfolk, Virginia, US.

CVN 65 supported the US Navy in missions such as blockading of the Cuban missile crisis, strike operations in Vietnam, and in combat missions supporting Operation Enduring Freedom.