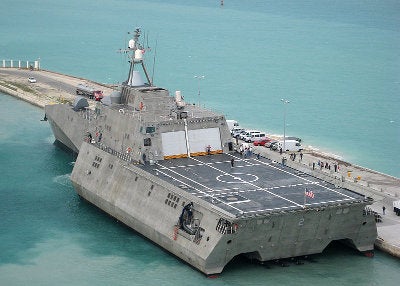 The US Navy has awarded contracts to Lockheed Martin and Austal for the construction of four additional Littoral Combat Ships (LCS).

Lockheed was awarded $696.6m to design and construct two LCS ships. Work under the contract will be performed at Wisconsin, Massachusetts, Washington, D.C., Florida, New Jersey, Minnesota and various locations in the US.

With each LCS costing $480m, a total of 20 ships in two different hull designs will be acquired by the navy from both companies between 2010 and 2015.

The networked surface combatant ship has a full-load displacement of 2,637t, an operational range of 4,300nm and can cruise at a speed of 40k.

Aimed to fill the operational combat requirements gaps currently in the US navy, the LCS programme will support in defeating anti-access and asymmetric threats and provide access and dominance in coastal waters.

General Dynamics Advanced Information Systems is supporting Austal for the LCS programme and is responsible for design, integration and testing of the ship's electronic systems for combat, networks, and seaframe control.

Austal and Lockheed will complete work under the contract by June and July 2018, respectively.