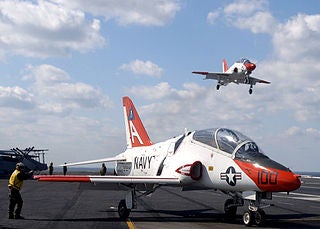 The US Navy has put four Boeing-built ground-based flight simulators into operational use to train naval flight officers (NFO) at Naval Air Station Pensacola, Florida, US, to enhance safety and reduce costs.

"This allows the navy to add an array of virtual wingmen and synthetic threats, building a more robust mission rehearsal."

"This allows the navy to add an array of virtual wingmen and synthetic threats, building a more robust mission rehearsal," McGraw added.

Training on the simulators will help students become familiarised with capabilities such as navigation, communication, emergencies, target identification and weapons employment, and basic carrier operations, as well as other learning objectives.

Operating from the back seat of the aircraft, NFOs specialise in airborne weapons and sensor systems.

The unarmed trainer aircraft has a single pylon installed under each wing for carrying bomb racks, rocket pods or auxiliary fuel tanks.