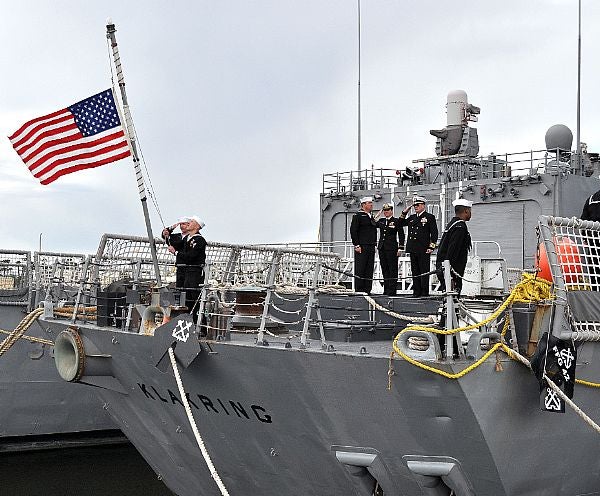 The US Navy has decommissioned Oliver Hazard Perry-class frigate, USS Klakring (FFG 42), during a ceremony at Naval Station Mayport, US, drawing a close to its 30 years of service.

Commissioned in June 1983, the Perry-class ship was named after Rear Admiral Thomas B Klakring (1904-1975), a navy submarine commander during the Second World War.

Prior to its decommissioning, the 133.5m-long, 4,100t USS Klakring has completed its final deployment as part of Operation Martillo in the US 4th Fleet area of responsibility, operating in the Caribbean Sea and off the coast of South America.

The General Dynamics Bath Iron Works-built ship has undergone more than 22 deployments including to the Middle East, South America, Europe and Africa from three home ports.

Capable of cruising at a maximum speed of 30kt, the vessel is integrated with AN/SQQ-89 (CV)2 anti-submarine warfare (ASW) combat system, SPS-49(V)5 or (V)4 air search radar to detect aircraft to a range of 460km, and ISC Cardion SPS-55 surface search radar.

Powered by two GE LM 2500 gas turbine engines and driving a single shaft with a constant pitch propeller, the Perry-class ships are fitted with two auxiliary retractable propellers for manoeuvring and station keeping.