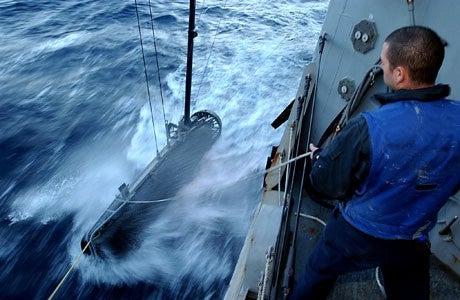 The US Navy has successfully completed the second phase and final reliability testing on the Lockheed Martin-built remote minehunting system (RMS), a critical component of the mine countermeasures mission package for the littoral combat ship (LSC) class.

The trials have been conducted off the coast of Palm Beach, Florida, US, marking a step towards the developmental testing phase.

During the four-month testing period, the LSC RMS system has conducted 47 missions for more than 850 hours and validated reliability of its unmanned, autonomous remote multi-mission vehicle (RMMV) design improvements, as well as reliability necessary to meet requirements of the programme.

Littoral Combat Ship Squadron Mine Countermeasures Detachment sailors have provided both mission operations and vehicle maintenance support to the testing, while the Naval Surface Warfare Center Panama City Division engineers have supported all aspects of it.

"Initial analysis of the data indicates that we have met or exceeded the reliability growth programme objectives and are ready to proceed to the developmental test phase."

Remote minehunting system programme manager Steve Lose said: "Initial analysis of the data indicates that we have met or exceeded the reliability growth programme objectives and are ready to proceed to the developmental test phase, which is scheduled to commence in the fourth quarter of fiscal year 2013."

The RMS features RMMV and has been designed to bridge the critical mine warfare gap to detect, classify, localise and identify bottom and moored mines in littoral regions using unmanned and offboard systems.

Capable of providing visual image and a contact data list for operators, the AN/AQS-20A is fitted with five separate sonar/sensors in a compact, lightweight, and hydro-dynamically stable towed body to localise mine-like objects.

Image: A US Navy’s RMS centred on a remote multimission vehicle. Photo: courtesy of US Navy.