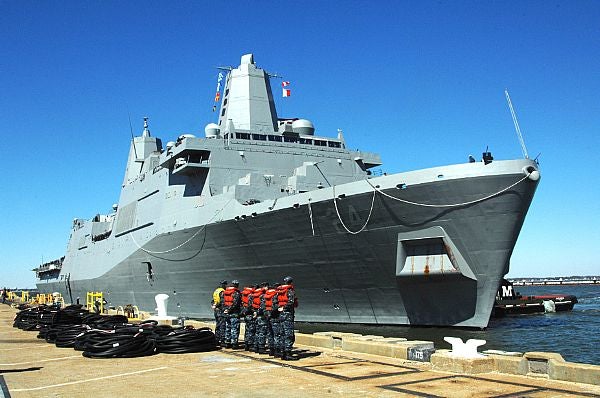 The US Navy has commissioned its eighth San Antonio-class amphibious transport dock ship, USS Arlington (LPD 24), during a ceremony held at Naval Station Norfolk, Virginia, US.

Intended for use in modern expeditionary combat situations, the Huntington Ingalls Industries (HII) built ship has been named for the county of Arlington, as well as to honour the victims of the 9/11 terrorist attacks.

US Navy secretary Ray Mabus said: "For the next several decades, Arlington will take marines and their equipment wherever they are needed, whether to provide humanitarian assistance or lethal combat capability."

The LPD 17 class ships will replace more than 41 ships currently in service with the US Navy, including the Austin-class (LPD 4), Anchorage-class (LSD 36), Charleston-class (LKA 113) and Newport-class (LST 1179) of amphibious ships.

Capable of carrying a crew up to 800 while cruising at a speed of 22k, the LPD 24 ship can transport air cushion (LCAC) or conventional landing crafts, as well as helicopters and the Osprey tilt-rotor aircraft.

"For the next several decades, Arlington will take marines and their equipment wherever they are needed, whether to provide humanitarian assistance or lethal combat capability."

In addition to improving firepower, the ship will provide enhanced vehicle lift-capabilities and cargo-carrying capacity.

Launched in November 2010, the vessel is equipped with the AN/SLQ-25A Nixie towed decoy system and the mk53 Nulka decoy launching system.