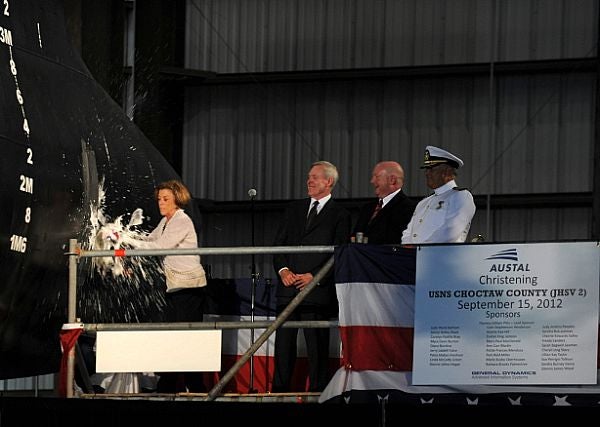 Navy secretary Ray Mabus said: "I chose to name this joint high-speed vessel after Choctaw County where core American values of hard work, putting family first, and giving back to your community are on constant display."

Austal received a $1.6bn contract from the US Navy in November 2008 to build the first JHSV, with options for nine additional vessels between 2009 and 2013.

The navy recently awarded a $321.7m follow-on contract to the company for the construction of the eighth and ninth JHSVs and is yet to award construction options for the tenth.

"I chose to name this joint high speed vessel after Choctaw County where core American values of hard work, putting family first, and giving back to your community are on constant display."

USNS Choctaw County has been named after three US counties sharing the same name, located in Mississippi, Alabama and Oklahoma.

Capable of transporting troops and equipment, military vehicles, cargo and equipment for a range of global missions, the 103m-long JHSV has been designed to be fast, flexible and manoeuvrable in shallow waters.

The vessel can support a range of missions which include warfighter through traditional logistics missions, humanitarian support, disaster response and maritime law enforcement missions.

It is capable of reaching speed in excess of 35k when fully loaded while performing day and night air vehicle launch and recovery operations in shallow-draft ports.

The navy is expected to receive USNS Choctaw County following the completion of acceptance trials.

In addition, the frigate will also undergo operational testing prior to its deployment with the navy, scheduled for the first quarter of the 2014 fiscal year.