US Navy to christen USS America on 20 October
Menu 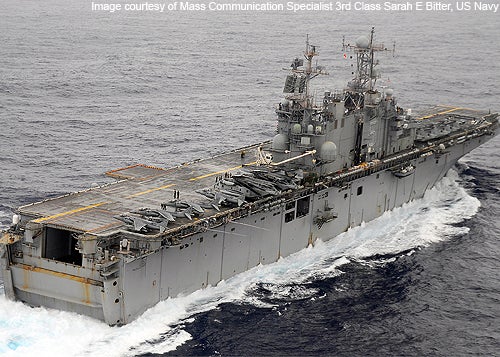 The US Navy is set to christen the America-class large-deck amphibious assault ship, USS America (LHA 6), at the Huntington Ingalls Industries (HII) shipyard in Pascagoula, Mississippi, on 20 October.

Navy secretary Ray Mabus said: "The LHA 6 will inherit and continue the proud tradition of distinguished service that has long been associated with ships bearing the name America."

The 844ft-long and 106ft beam USS America will have a displacement capacity of 44,971t and will replace the Tawara-class of amphibious assault ships.

"For decades to come, the America-class will give sailors andmarines highly capable, flexible and advanced platforms for executing the complete spectrum of operations," Mabus added.

"For decades to come, the America-class will give sailors andmarines highly capable, flexible and advanced platforms for executing the complete spectrum of operations."

Designed to provide power projection as an integral part of joint, interagency and multinational maritime expeditionary forces, the LHA 6 will support a range of missions such as embarking, transporting, controlling, inserting, sustaining and extracting elements of a marine air-ground task force.

Ported in San Diego, the USS America keel was laid in July 2009 and is currently under construction at HII’s facility; it is scheduled for delivery to the US Navy in late 2013.