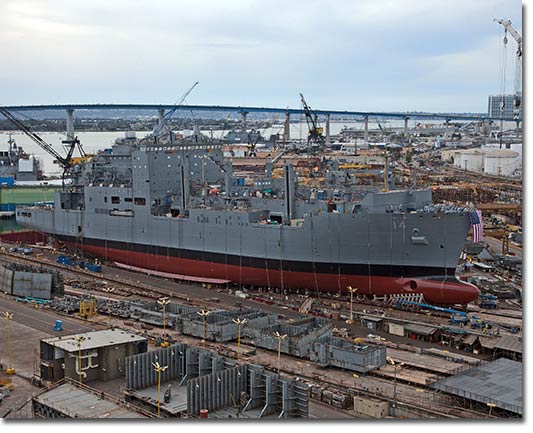 The US Navy will christen and launch the fourteenth and final Lewis and Clark-class dry cargo-ammunition ship, USNS Cesar Chavez (T-AKE 14), on 5 May.

NASSCO received an additional contract for the construction of USNS Medgar Evers (T-AKE 13) and T-AKE 14 in 2010, as part of the navy’s T-AKE acquisition programme for 14 ships worth a total value of $3.7bn.

Named in honour of the US Navy’s Mexican-American civil rights activist Cesar Chavez, T-AKE 14 will be used by the navy’s Military Sealift Command (MSC) primarily to transport US Marine Corps equipment overseas.

The 689ft-long frigate is capable of supporting an aircraft carrier’s aircraft and crew members and can operate independently at extended period at sea while transporting humanitarian assistance and disaster relief supplies.

The cargo-ammunition ships are designed to deliver cargo capacity of more than 10,000t, which include food, ammunition, fuel and other provisions from shore stations to combat ships at sea.

"The cargo-ammunition ships are designed to deliver cargo capacity of more than 10,000t."

Powered by a single-shaft, diesel-electric propulsion system, T-AKE frigates have a displacement capacity of 42,000t, a beam of 106ft, a navigational draft of 30ft and can cruise at a maximum speed of 20k.

The US Navy recently received USNS Medgar Evers (T-AKE 13) from GD NASSCO while USNS Cesar Chavez will be delivered to the US Navy in the fourth quarter of 2012.

Of the 14 ships, 11 will serve as CLF ships and the remaining three will be part of the Maritime Prepositioning Force..