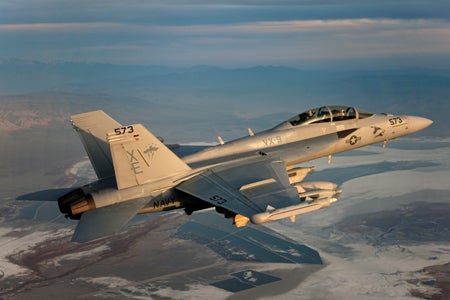 During the 90-minute airborne demonstration, the new AMC was equipped on to a US Navy F/A-18F Super Hornet aircraft and validated its capability, while meeting all critical safety and system requirements.

"Working collaboratively with the US Navy and our industry partners, we are increasing combat capability with an affordable, evolutionary approach to technology advancements."

The US Navy had earlier awarded a contract to Boeing to deliver the first Super Hornets and Growlers, integrated with Type 4 AMC in 2014.

"Working collaboratively with the US Navy and our industry partners, we are increasing combat capability with an affordable, evolutionary approach to technology advancements."

General Dynamics was awarded a sub contract by Boeing to serve as a prime supplier for development of the AMC in support of the navy’s Super Hornet and Growler aircraft.

Designed to improve computing performance capabilities, the AMC system can speed up image and mission processing functions, while supporting other missions systems equipped on to the aircraft, such as a distributed targeting system, infrared search and track, as well as a new high-definition touchscreen display.

The F/A-18E/F multirole aircraft is capable of conducting a range of missions, including superiority, day/night strike with precision-guided weapons, fighter escort, and close air support.

A derivative of the combat-proven two-seat F/A-18 Hornet, the EA-18G Growler air combat platform provides full airborne electronic attack capabilities, as well as targeting and self-defence for the user.