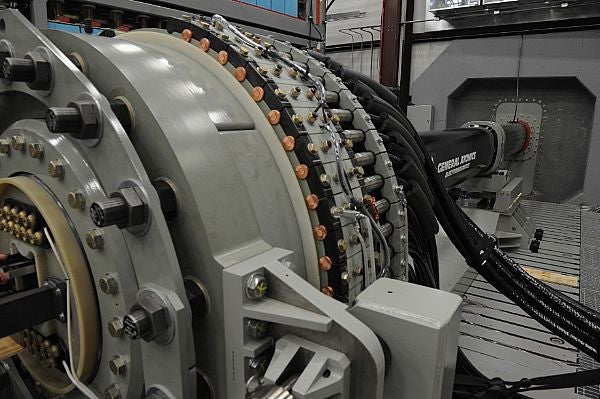 The Office of Naval Research (ONR) had placed orders with Raytheon, BAE Systems and General Atomics to develop a pulsed power system for launching projectiles with rapid succession.

BAE and GA were separately contracted to develop technologies to enhance future railguns that fire up to ten rounds a minute.

Testing of the first industry prototype delivered by BAE was carried out in February this year.

ONR Naval Air Warfare and Weapons Department EM railgun programme manager Roger Ellis said: "We’re evaluating and learning from both prototype designs, and we’ll be folding what we learn from the evaluations into the next phase of the programme."

“We’re evaluating and learning from both prototype designs, and we’ll be folding what we learn from the evaluations into the next phase of the programme."

The EM railgun development programme is intended to develop a 6m-long, 50mm-diameter and 64-megajoule weapon with a range of 220nm.

It creates a magnetic field with the help of high electrical currents to accelerate a sliding metal conductor, or armature, between two rails to launch projectiles at speeds of 4,500mph to 5,600mph.

US Navy forces will use the railgun to support a wide range of missions, including precise surface fire support or land strikes, cruise and ballistic missile defence, as well as surface warfare to deter enemy vessels.

The system is scheduled to be operational with the navy by 2025.