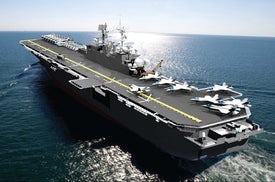 Huntington Ingalls Industries (HII) has been awarded a $2.38bn fixed-price-incentive contract for the design and construction of the America-class of large-deck amphibious assault ship, USS Tripoli (LHA 7), for the US Navy.

Ingalls Shipbuilding president Irwin Edenzon said: "We are pleased to continue providing such an important asset to the sailors and marines, who are being called on to perform an ever-increasing list of tough missions."

Ingalls large deck amphibious ships vice president Brian Cuccias said that the multi-mission capability of the ships has been proven in the fleet, and LHA 7 will further the technological advancements achieved by previous vessels.

"We have an excellent build plan in place for LHA 7, and we will continue to develop fresh ideas through the knowledge and experience our shipbuilders have in large-deck construction," he said.

The 844ft-long USS Tripoli, along with USS America (LHA 6), form the first two ships of the new America-class of amphibious assault ships, and are designed to transport a marine expeditionary unit (MEU) using helicopters.

""We are pleased to continue providing such an important asset to the sailors and marines, who are being called on to perform an ever-increasing list of tough missions."

The 106ft-wide vessel has a displacement of 44,971t and is capable of carrying a total of 1,059 crew members, besides marine helicopters, MV22 Osprey tilt rotor aircraft and F35B Joint Strike Fighter (JSF) aircraft.

USS Tripoli also features an enhanced aviation capacity to accommodate an enlarged hangar deck, realignment and expansion of the aviation maintenance facilities, along with an increase in available stowage for parts and support equipment, in addition to increased aviation fuel capacity.

Powered by a fuel-efficient gas turbine propulsion system, the vessel can also serve as the flagship for an expeditionary strike group, similar to the under construction USS America, which is scheduled to be launched in June 2013.

Construction work on the ship will be carried out at the company’s facility in Pascagoula, Mississippi, US, with delivery expected to take place in 2018.