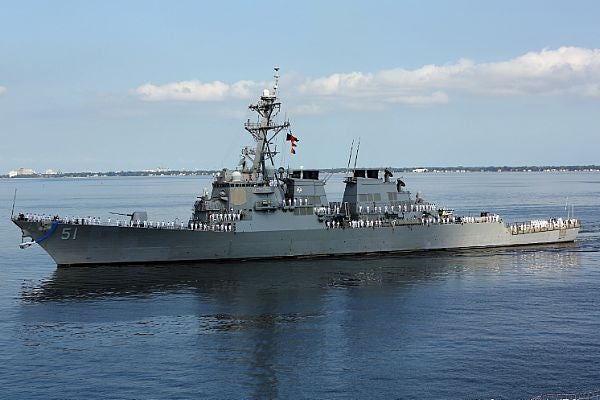 The US Navy has awarded two contracts to General Dynamics (GD) Bath Iron Works (BIW) and Huntington Ingalls Industries (HII) to construct a total of nine DDG 51 Arleigh Burke-class guided missile ships, with an option for a tenth vessel in a Flight IIA configuration.

General Dynamics BIW has received a fixed-price incentive firm target contract worth $2.84bn for the design and construction of four DDG 51-class ships, one in 2013 and one each year from 2015-2017, as well as an option for a fifth ship.

Under the second $3.33bn fixed-price-incentive firm target contract, HII will design and construct five DDG 51 class ships, scheduled one in each of fiscal 2013-2017.

Both contracts include options for engineering change proposals, design budgeting requirements and post-delivery availabilities and would cost $3.52bn and $3.38bn for General Dynamics and HII respectively if all options are exercised.

"These contract awards represent great value to the taxpayer and will ensure our warfighters have the ships and systems they need to prevail in any situation."

"These contract awards represent great value to the taxpayer and will ensure our warfighters have the ships and systems they need to prevail in any situation," Mabus said.

Powered by four gas-turbine propulsion plants, the 509ft-long destroyers have a displacement capacity of 9,500t, can cruise at a speed of 30kts and are equipped with advanced sensors, as well as weapons systems to engage anti-ship missile threats.

DDG 51-class multi-mission guided missile vessels can perform a range of operations, from peacetime presence and crisis management to sea control and power projection, as well as simultaneously engage in air, surface and subsurface battles.

Work under the contracts is expected to be complete by July 2023, with Naval Sea Systems Command serving as the contracting activity.